By Promotions DepartmentDecember 20, 2019 No Comments 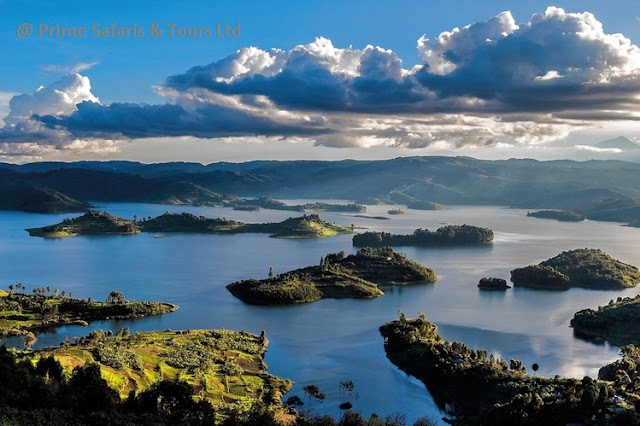 Until recently, Lake Bunyonyi seemed like a well-kept secret among the people of Kabale in southwestern Uganda. Lake Bunyonyi is, therefore, a hidden African Jewel situated in Uganda characterized with beauty seen in over 29 islands it holds, pleasant climate and a perfect spot to relax and chill on a Uganda safari tour. This lake is enclosed with lavish green-terraced hills that range between 2,200-2,478m above sea level that creates a spectacular background.

Lake Bunyonyi extends northwards from the Rwanda border over a distance of 25kms through the contours of the steep hills that separate Kabale and Kisoro districts. Lake Bunyonyi covers a distance of about 60 square kilometres. The lake is also the deepest lake in Uganda with over 900 meters. Active travellers on Uganda safaris/ Uganda tours are catered for with different activities like canoeing, boat cruise, nature walks, biking and bird watching for those interested in Uganda birding safaris/ Uganda birding safari tours.

Tourists that have visited Lake Bunyonyi Uganda during their safaris in Uganda have rated it as one of the country’s top natural treasures that should be considered one of the natural wonders of the world and ranked the most treasured travel destinations therefore recommended for this festive season too. Bunyonyi means a place of many little birds but its imposing beauty can easily make you forget that you are in a prime birding spot for those on a Uganda birding tour. Travellers interested in birding safaris Uganda cannot miss adding Lake Bunyonyi in their itinerary in addition to other birding destinations in Uganda.

Its beauty is so imposing that it even appears on the 5000 Uganda shilling banknote. Dotted with 29 islands you may think the creator was in the mood to be extravagant with the beauty. The terrain around the lake is similar to what most of Rwanda (the land of a thousand hills) looks like. It has very steep hills and beautiful terraces that add organized beauty to this destination. The weather of the lake changes right from morning till late. In the early morning, Lake Bunyonyi’s Islands are always covered with cotton candy-like mist and in the afternoon, they’re immersed with the warm glow of the sun. Later, they’re outlined against a dim sky as evening approaches. Sometimes the islands vanish from sight completely, hidden under a blanket of clouds, and later you see them emerge once as the sun brightens.

Each of these Islands holds a different historical story to be told. Lake Bunyonyi is surrounded by steep terraced hillsides that give it a gorgeous look. This magical place, especially with a morning, you will see the mist rising off its placid waters. It has succeeded the Ssese Islands on Lake Victoria as the most frequently visited island by travellers on Uganda safaris,  honeymoon safaris in Uganda, Uganda birding safaris, family vacations, as well as a relaxing place for people from Uganda wildlife tours and Uganda gorilla safaris. While there, you will enjoy the natural musical sounds from the birds around the lake. Best of all, unlike many lakes in Africa, Lake Bunyonyi is bilharzia, crocodile and hippo free. It also has crystal-clear waters that are all yours to swim in.

Why is Lake Bunyonyi a wonderful birding destination? 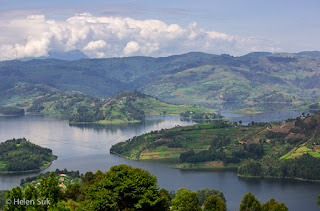 Your birding experience along a Lake Bunyonyi

Travelers are usually taken for nature walks along the lake and also driven in dugout canoes or boats to the different islands along the lake because all can be accessed by boat. Some of the island on the lake include; -Akampene ,Bushara, Bwama and Njuyeera, Bacuranuka and many more. Some tourists enjoy transferring from one island to another on boat as they search for different bird species. As they sail on the waters of Bunyonyi, they get a chance of encountering some birds especially the water birds as they play and roam about the water surface.

Apart from viewing these rare bird species, there are other tourists activities in Lake Bunyonyi that tourists can do including, boat rides, swimming, sport fishing, cultural and nature walks around the lake.

H0w to get there!

are more than enough road signs giving directions to the second deepest in Africa.

If you are driving from Entebbe or Uganda’s capital; Kampala, you will have to endure a long ride of about 7 hours before getting to Kabale town. If you are coming from another capital like Kigali in Rwanda, you will only spend about 2 hours on the road before you get to Lake Bunyonyi Uganda.

How to Plan the best Uganda birding safari trip in Uganda

Planning, of course, involves prior booking especially when you are going to a new country or travelling for the first time. Uganda has different Uganda tour operators online but Prime Uganda Safaris & Tours is the leading Uganda birding safari tour operator in Uganda. Once you start your Uganda tour preparations with them, they ensure all preparations like hotels or your Uganda safari accommodation bookings, transport or 4×4 safari vehicle for hire in Uganda are booked early.

Bird watching can be done all year round however, the best Uganda tour season for a birding safari Uganda is during the dry season in the months of January to March when the tropical forests are accessible and the not slippery for hiking. The breeding season, however, is during the month of June and this is when the birds are very colourful.

Uganda has for long been considered as one of the best Africa birding safari destinations that any bird fanatic must not miss on his bucket list. Safari Uganda for your Uganda bird watching tour and get to witness several bird species that call Uganda home, the rich culture and wildlife diversity that has seen a rise in Uganda birding safaris tours, Cultural Safaris in Uganda and Uganda Wildlife Safaris respectively in the past years. Referred to as the Pearl of Africa, you will enjoy sightseeing of the vast captivating landscapes that wow a tourist driving by the countryside during their Uganda tour, water bodies including the second largest freshwater lake; Victoria and the world’s longest river; Nile, and forests like the Bwindi Impenetrable Forest, Mabira Forest and many more. All these once visited on your tour Uganda, you will indeed witness why it is called the Pearl of Africa. Uganda has an equatorial climate and has the Albertine Rift Valley in the western part of the country which is host to several bird species. Book with us and have the best Africa safari tour memories.

Such a great destination to visit, Uganda offers several safaris and these popular tours are the best to choose from when planning to visit Uganda.

Click here to assign a widget to this area.